Now we have things together. The high beam problem with its particular idiosyncrasies (see Part 2) and some key ingredients how to solve (see Part 3 and Part 4) . In the end the problem is solved with 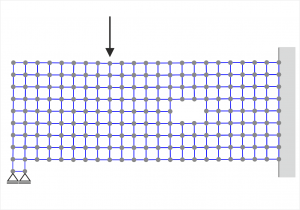 Loading is applied as prescribed displacement of a center upper node as indicated in the Figure. Displacement control basically allows to catch ultimate load bearing states in contrast to load control. Results are presented in the following.

First is computed load-displacement curve of the node with a prescribed displacement. First 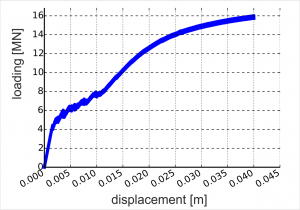 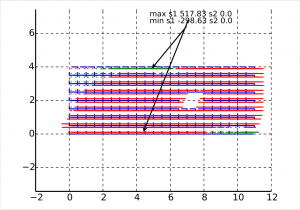 step. First impression is widespread red horizontal lines which indicate tension. The direction indicates the stress direction, length of red lines indicates stress magnitude. Scaling is not perfect, so lines overlap. Two points are lifted, the first with maximum tensile stress and the second with minimum compression stress. The assumed yield limit of 500 MPa is exceeded for the former with utilization of some hardening. Maximum stresses basically arise at bottom side midspan and top side right end. Notice, the right end is clamped over the whole high beam’s height. This distribution corresponds to a beam model. 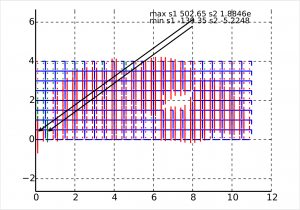 computed step. First impression is widespread red vertical lines. The same notes basically apply as before with changed orientation. Distribution of reinforcement stressing within the high beam changes. This is not comprehensible with beam models. Nevertheless, the vertical mesh is essential to make the high beam working.

Finally, computed principal stresses for the concrete in the last computed step. A prinicipal stress state has two 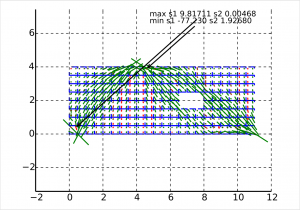 components and an orientation. A green color indicates a compressive principal stress, a red color a tensile principal stress. A tensile stress is allowed due to (a) the prescribed tensile strength of concrete, (b) imbalanced residuals of the finite element equilibrium iteration, which fall below the prescribed convergence limit, (c) the assumed viscosity.  The major contribution of concrete naturally comes from compression. It can be nicely seen how two concrete struts form whereby the right one strives to circumvent the opening.

But the material model obviously is not realistic for normal graded concrete which cannot sustain roughly 80 MPa. We should look for better models. To be continued. Stay tuned.