I use a reinforced concrete high beam – see fib bulletin 45 and the Book 6.4 – as test case. 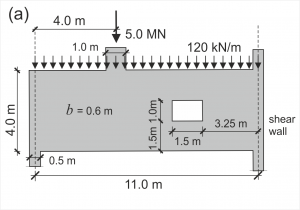 It has a concrete body, a reinforcement web with horizontal and vertical orientation and single reinforcement bars around the center opening. The loading is incrementally applied as prescribed displacement of a single central node on the upper edge. This leads to a load-displacement curve.
The discretization is performed with plane stress quad elements for the concrete body and the overlaid web and with 2D-rebar elements for the rebars. The material behavior is orthotropic with uniaxial Mises in each direction for the web and uniaxial Mises for the rebars. Bond is assumed as rigid.

Concrete is modeled as linear elastic with limited tensile strength. Cracking occurs according to the Rankine criterion and cracks are modeled as smeared and rotating. A softening behavior is assumed normal to crack orientation after cracking. This also considers unloading, crack closure and reloading, see Figure. 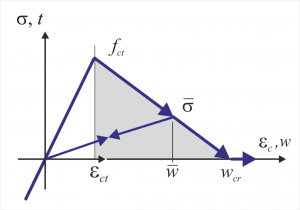 Biaxial cracking has to be considered. Concrete is assumed to be linear elastic with limited tensile strength − in crack direction − after the first cracking occured. This leads to orthotropic behavior. A second crack is allowed in case that the tensile strength is reached in the particular direction.

So where is the problem? To be continued, stay tuned.